So Where Were We?


Man I have been slacking. I got so into the Roku situation that I have completely neglected the dolls. And since my car died and I now have a car note, my insane doll shopping spree is at a close. Except I found the 1960s Reading Deluxe Dream Kitchen (minus table and chairs) at a thrift store for $35. Then there was this cute pitcher there (on the dishwasher) and a Gibson guitar, so...(forgive the cellphone pic). 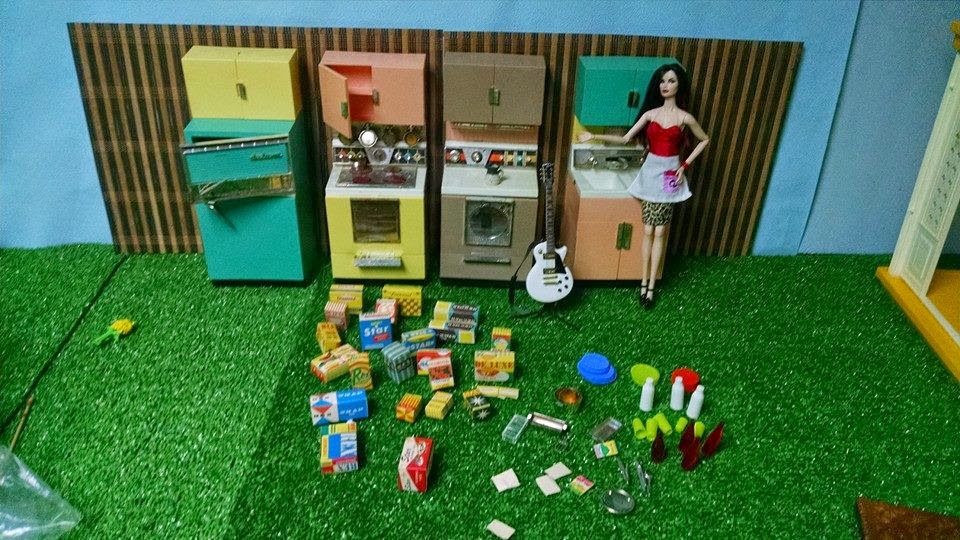 Anyway I hope to getting back to a craft/diorama focus in my doll work.

Can I be honest? I am terrified of my camera. I've avoided it since my last post. Setting up lights takes forever and changing them for every scene and the cords and the scary wiring in this house. Then taking 100 pics and those being all wrong and doing it again after I already took down all the damn lights. Ugh.

So whatever. When I do a glamour shot I'll fiddle with lighting and post production. But for photostories, eff it.

The following shots are done with a flash and auto-focus. In your face, effort! 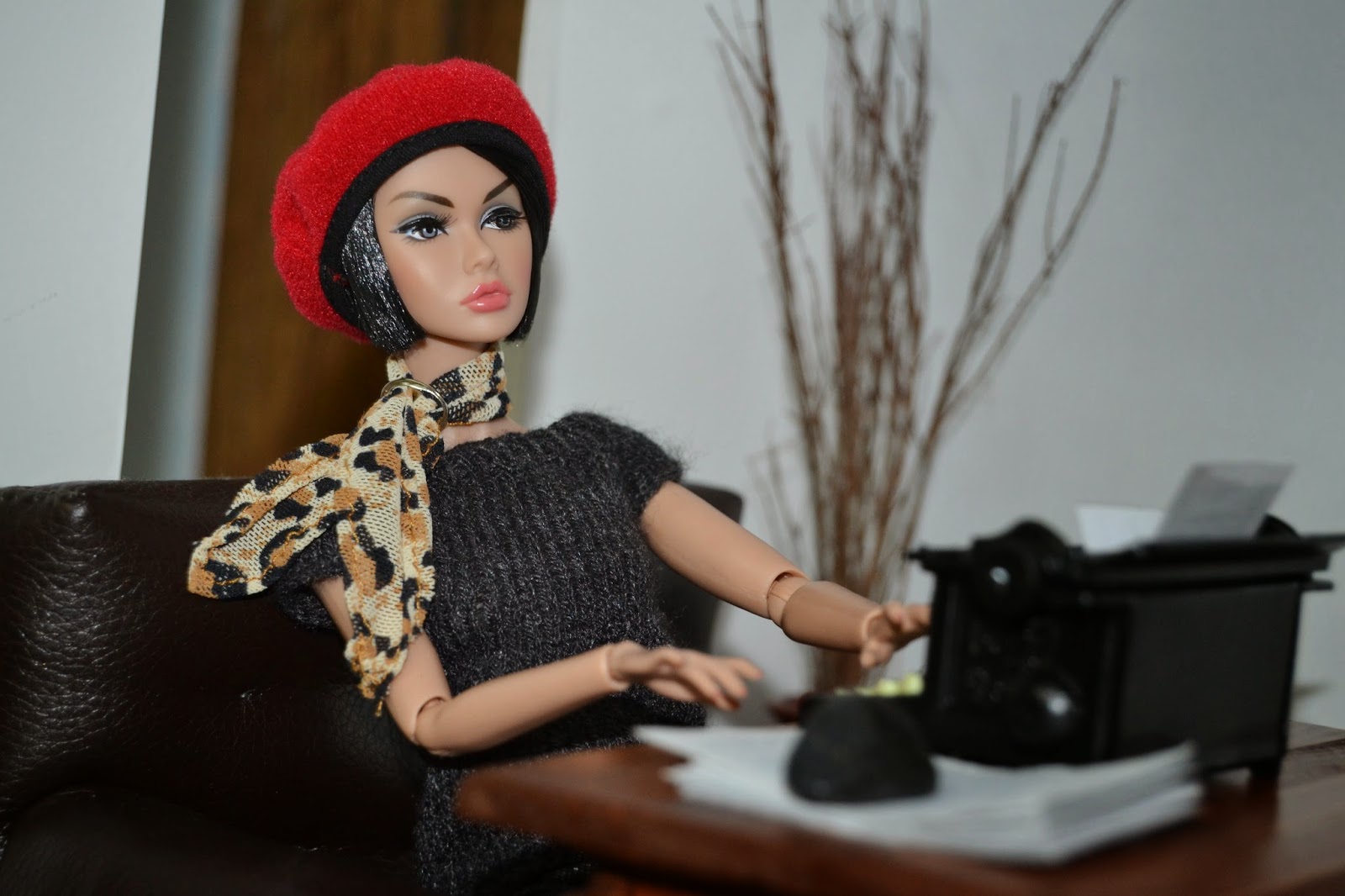 "Listen, Princess Danielle--"
"Please, I am no longer a princess, merely a duchess. Please call me Dani."
"Dani. I'm a fiction writer. I can't write your memoirs." 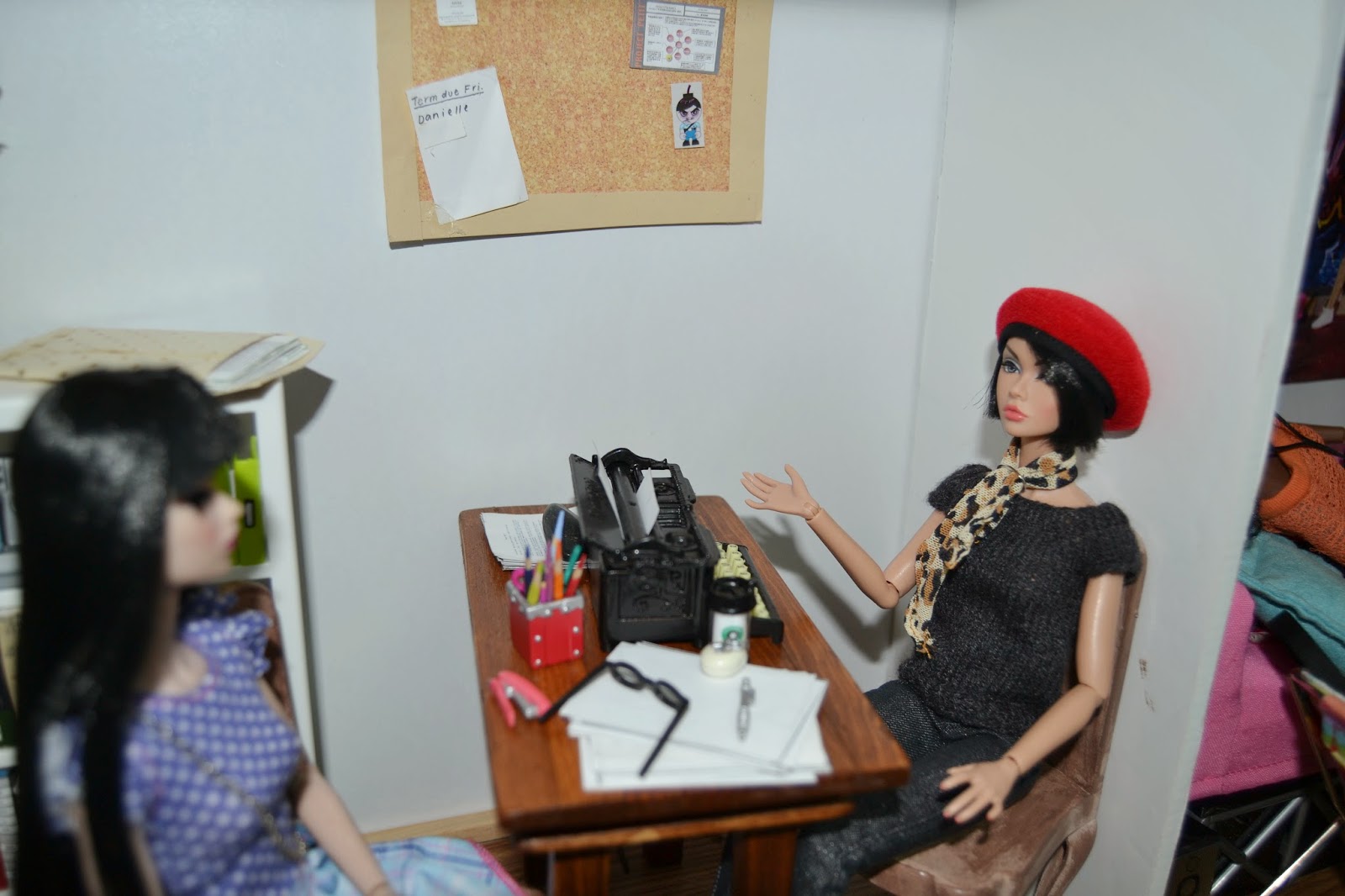 "I think it could do with some creative license. Just think about it. You'll be paid handsomely."
Poppy did tend to base her novels on true events... 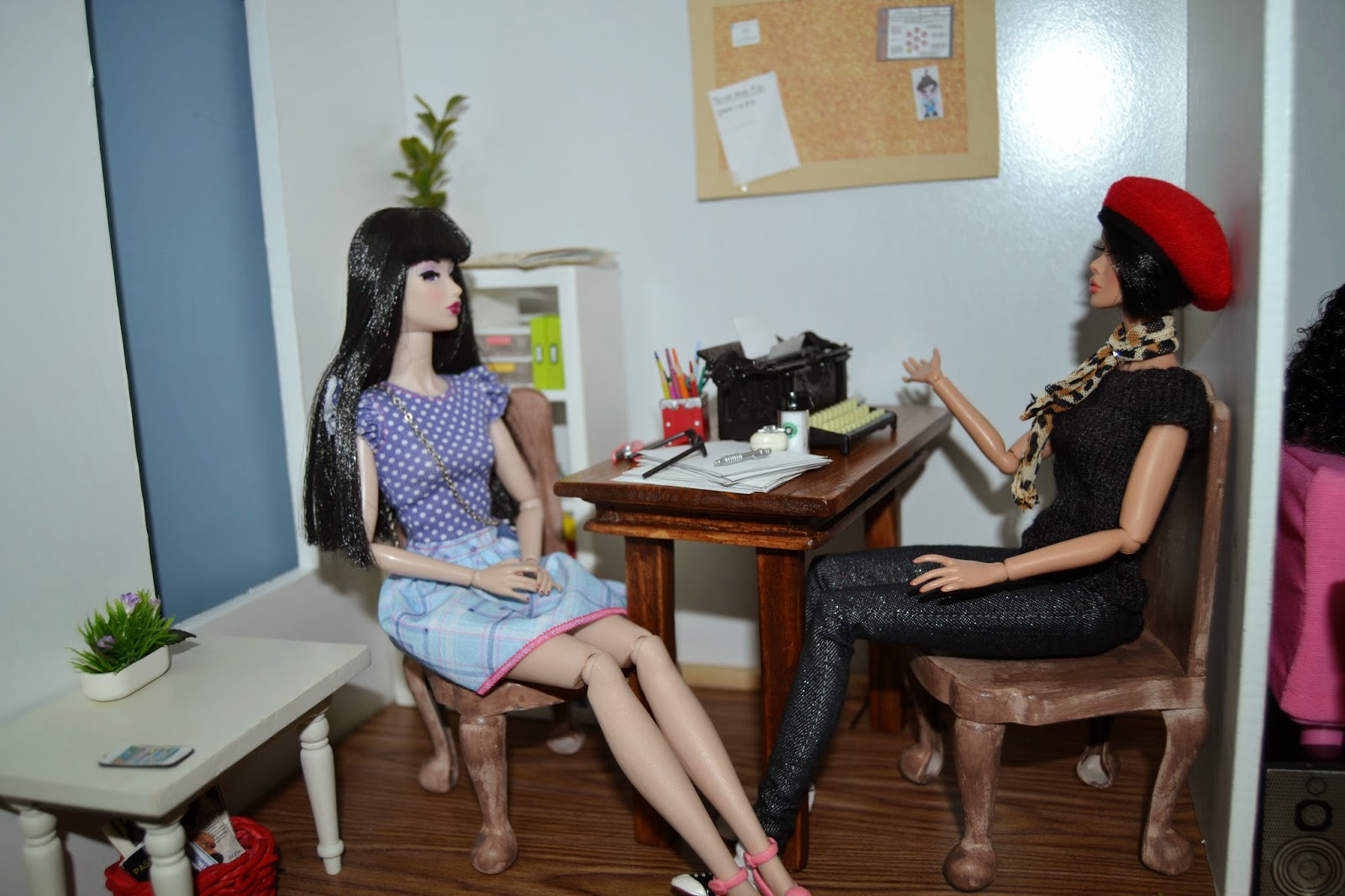 Tooki's in the next room, trying to download some music for her new DJ night at the club but as the new cool girl in town, everyone wants to pop by and hang out. 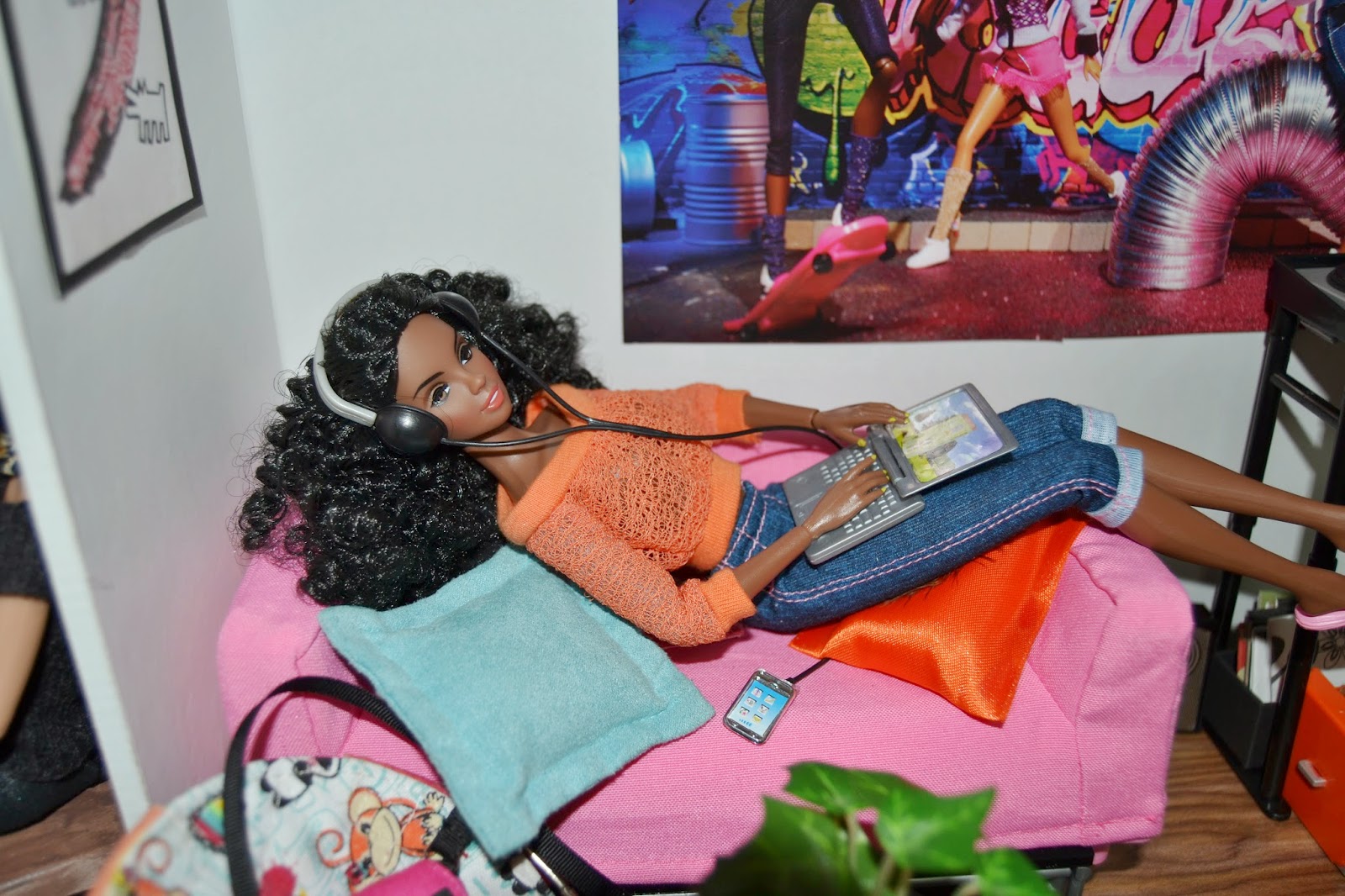 Marie gabs on, "So I told him to dump the supermodel already. We've been screwing for weeks and I'm tired of being second best."
Tooki sighs. 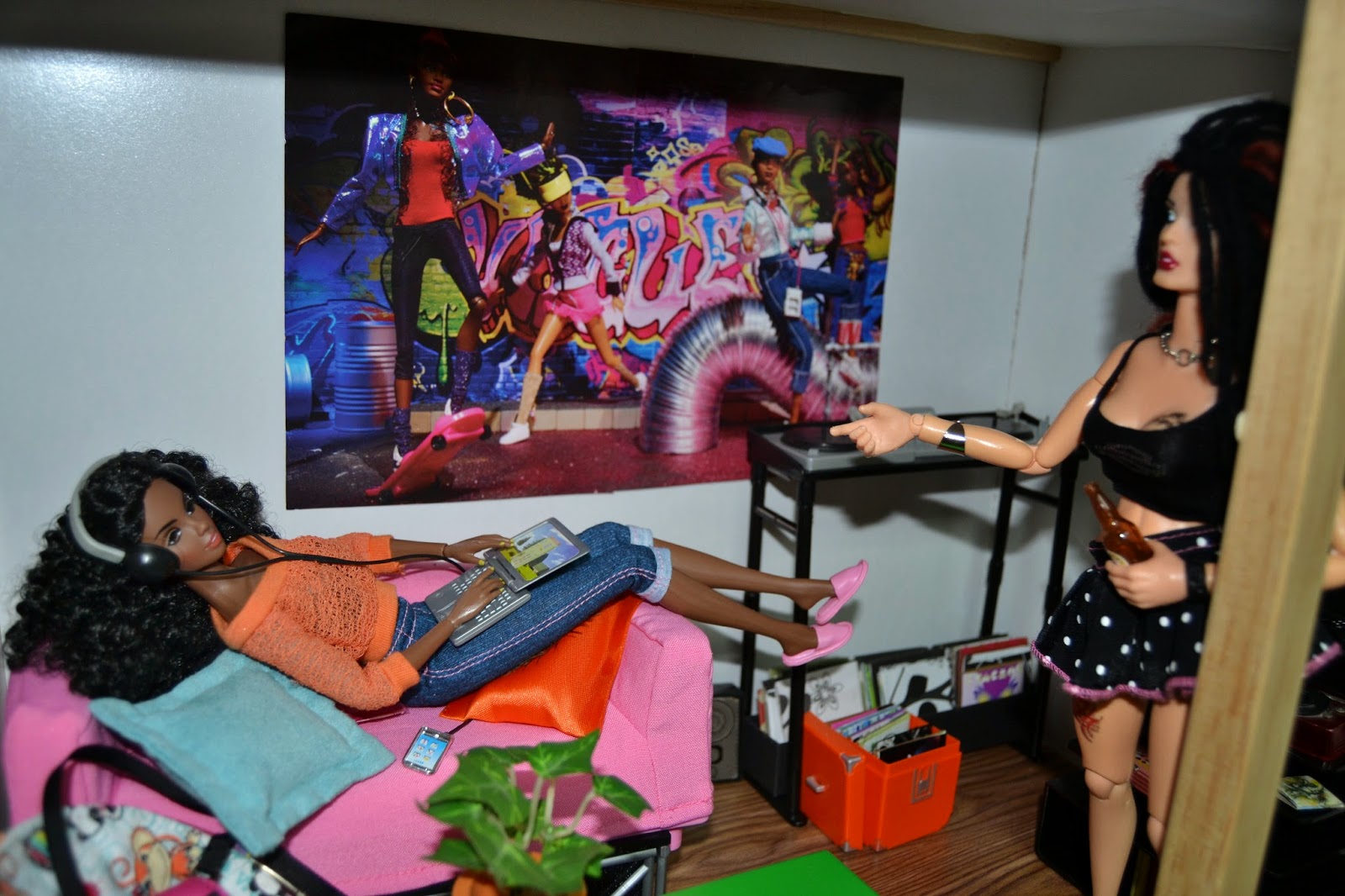 Poppy's brother Oliver is quite the hit with the young ladies. Who can resist a handsome rich stranger?  New dolls: City Shopper Barbie on a Monogram body, Back to Brooklyn Gavin on a Pop Life body and a rerooted Catniss. 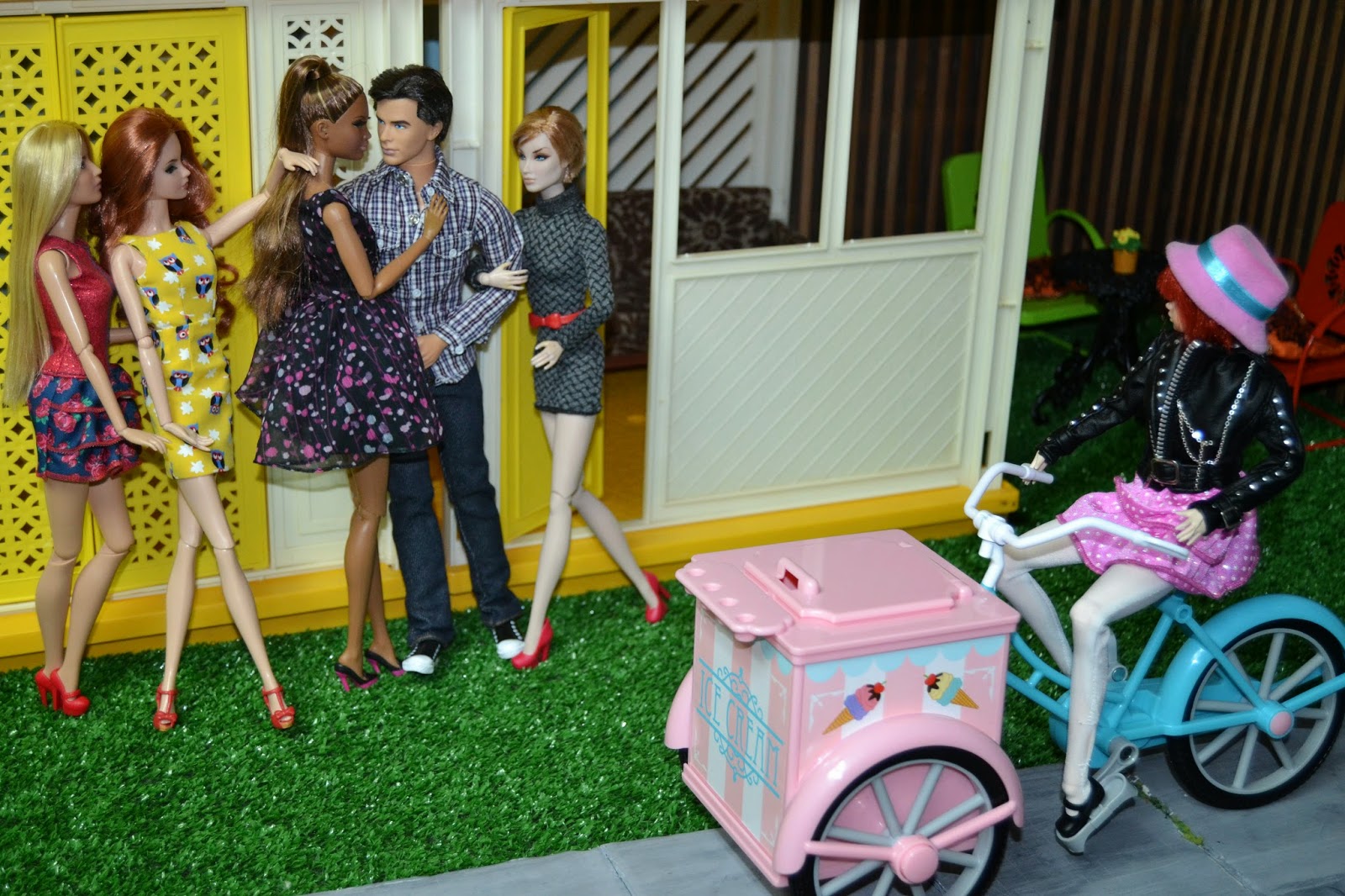 Is she still on the up and up or is she selling something else out of that bike? 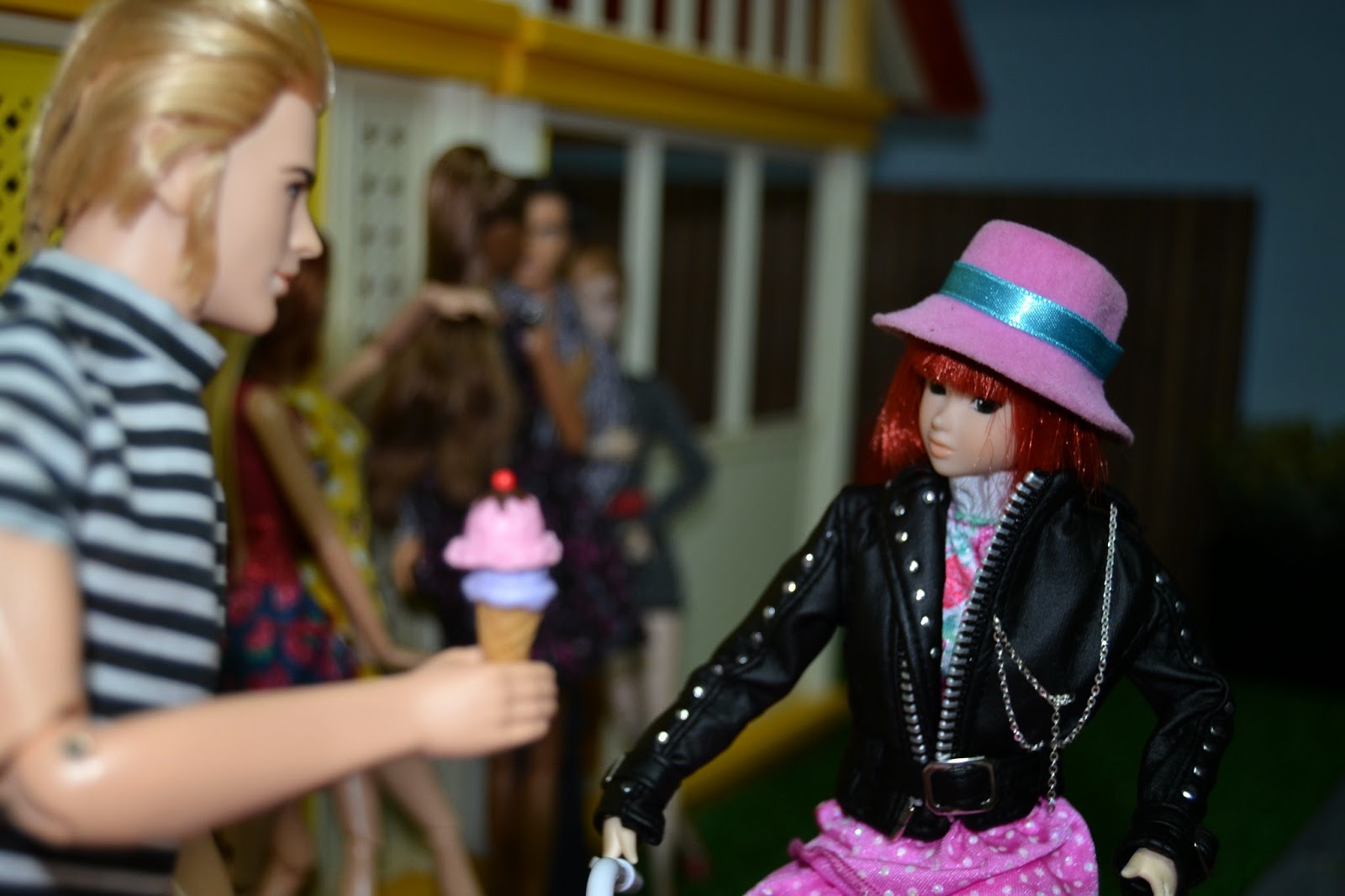 I finally got the A-frame dream house. I think next year I'll start buying missing parts and refurbishing it. This is a temporary furniture arrangement. I might do a cafe on the bottom. We'll see. 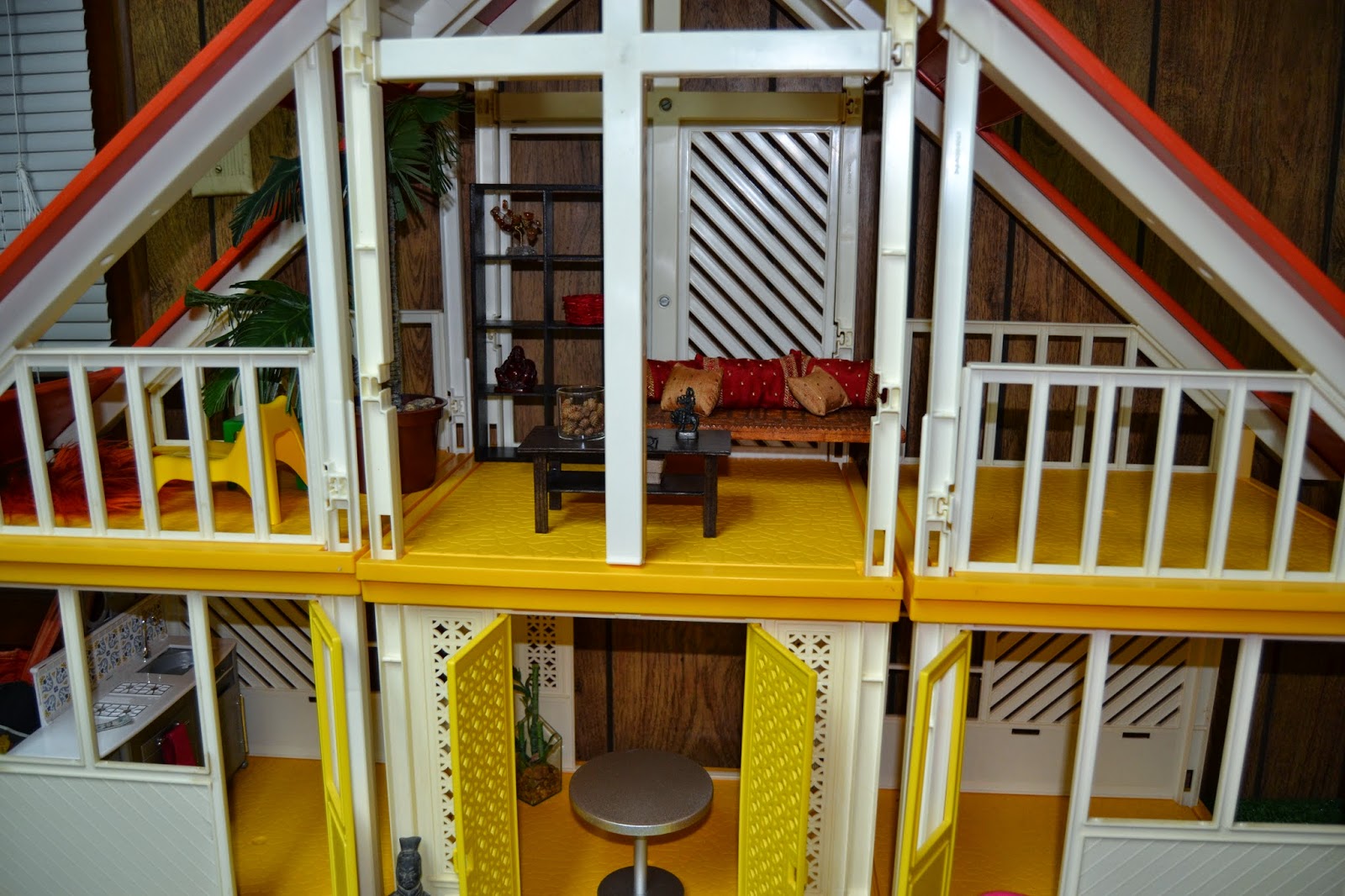 Love is in the air in Grandville!

In my Roku obsession, I fell in love with the Hannibal show (okay and with Hannibal himself) so once I found out there was a Mads Mikkelson sculpt, I had to have it. Mistress Ava has wanted a more dominant man and I thought he'd be perfect. However, she's in an FR2 body now and he is like an inch shorter than her.  He'll be on a lot of platforms until I can find him the right body. 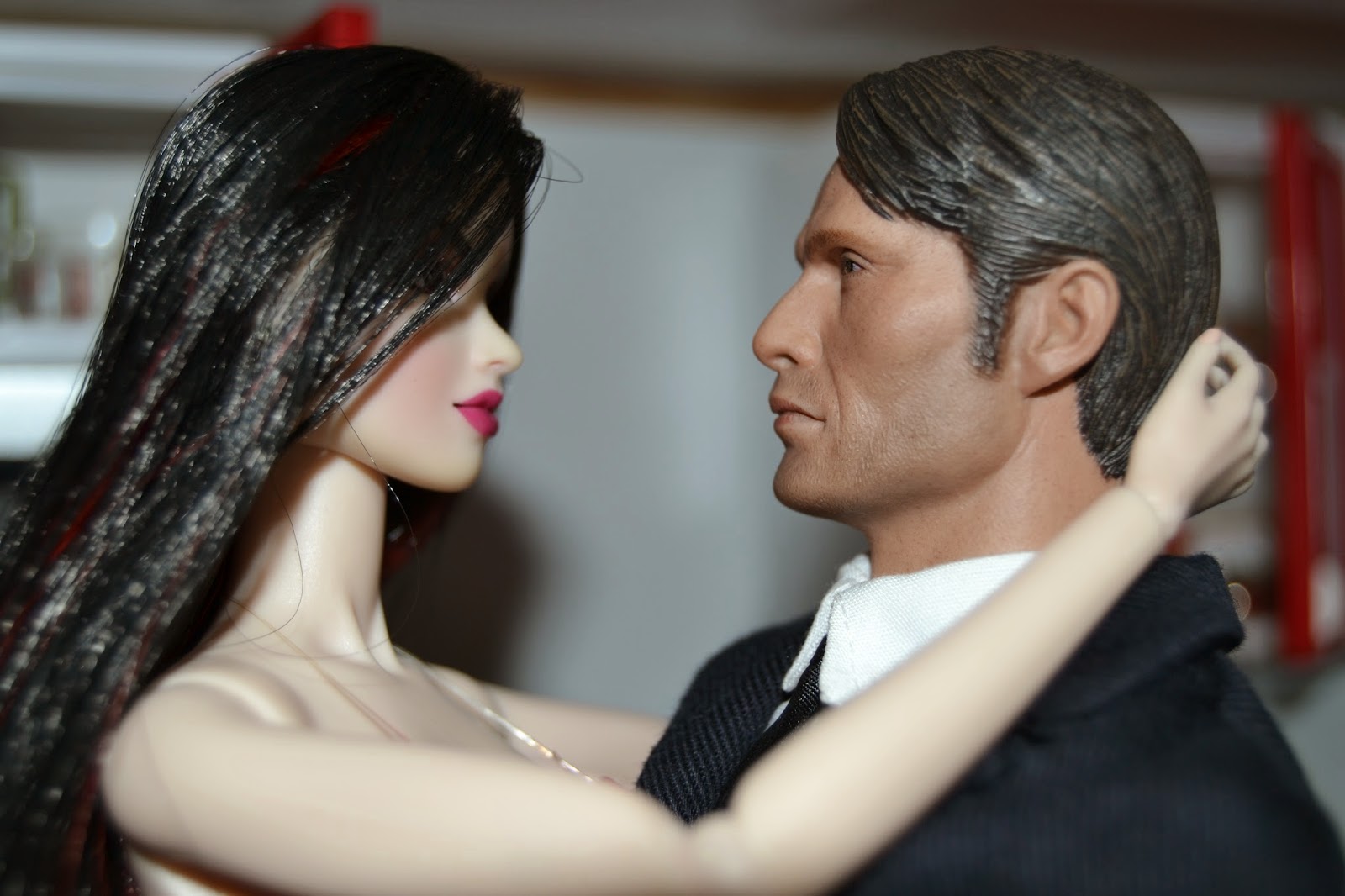 I like them as a couple and all but for the first time Ava looks kinda...scared. I hope he treats her right. 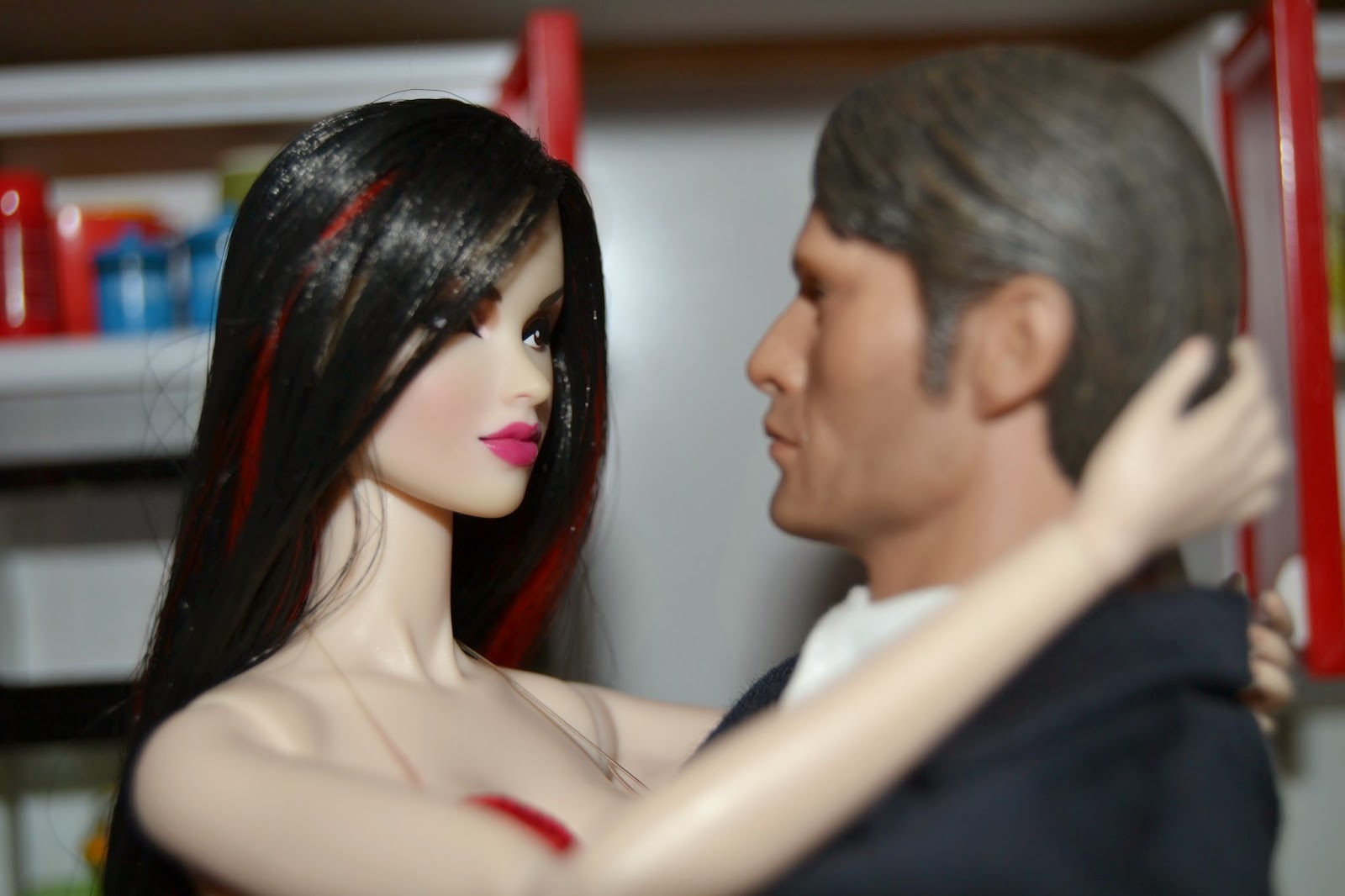 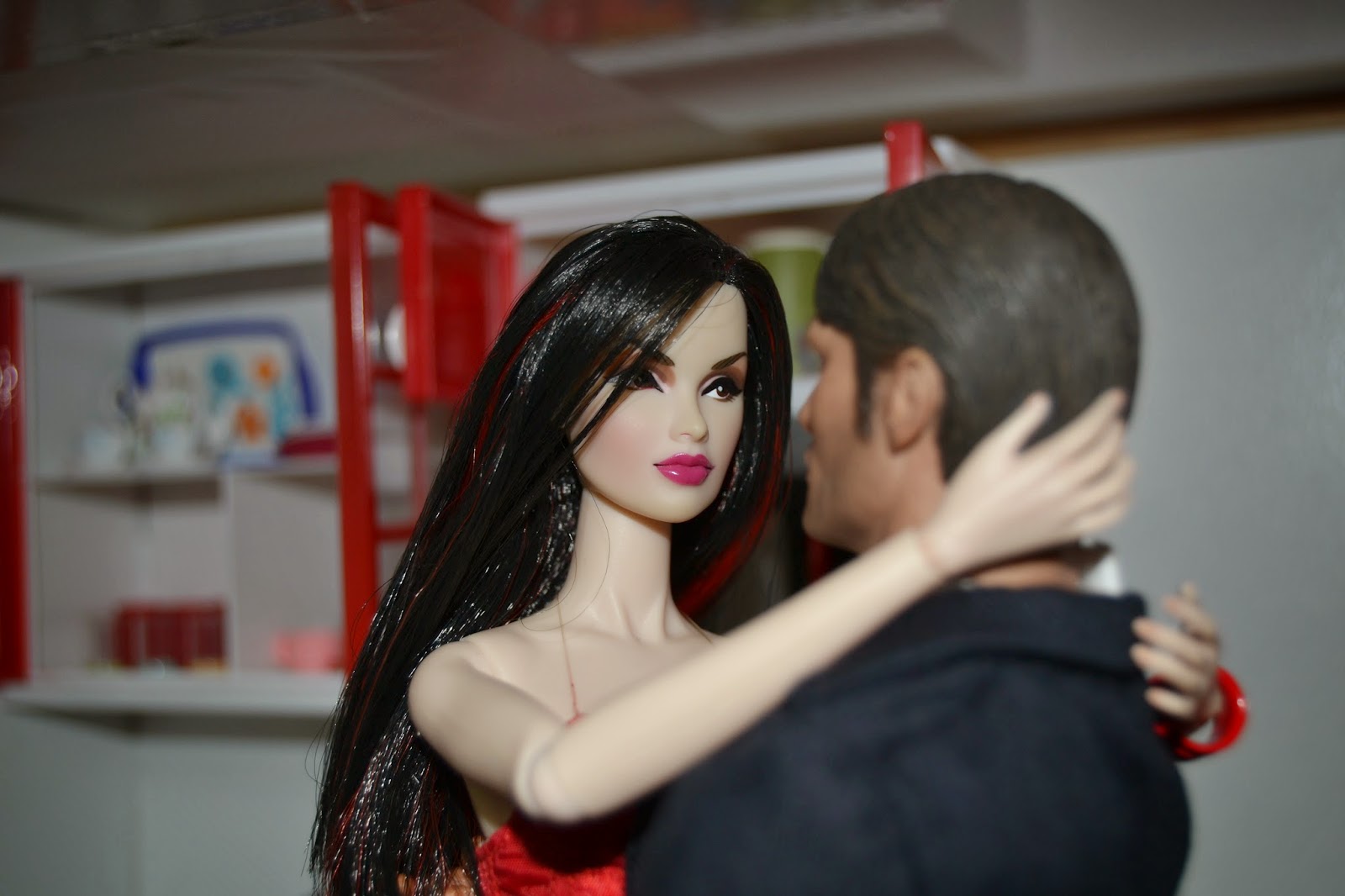 This is another couple I'm trying on. Judah and Nikki broke up so I'm letting him play the field. Sabine is new in town and an entrepreneur. She's not into anything serious right now. The Hubs doesn't like them together at all. They look too much like the same type I guess. Do you think they could work as siblings? 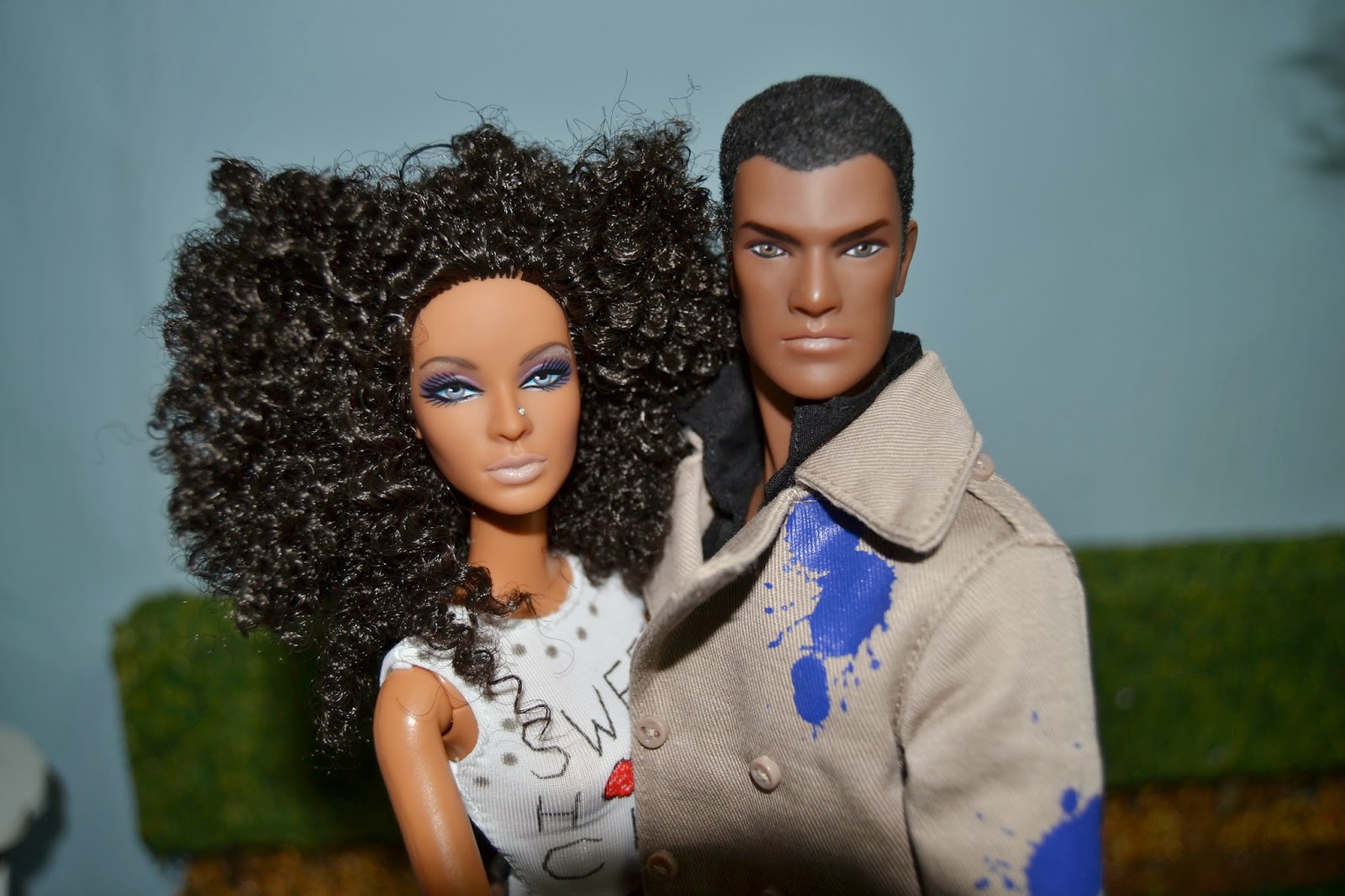 As you'll see in my next post, my professional photographer friend Liz who was on bed-rest requested some doll and props to shoot so as to not go totally stir crazy. She told me Sydnee was totally hitting on the other chicks.

When Sydnee came home I introduced her to a newly single Valentina and they hit it off more quickly than any doll couple since Dani and Felix. I was uninterested in Sydnee but now she's much more appealing. Look at the tenderness. 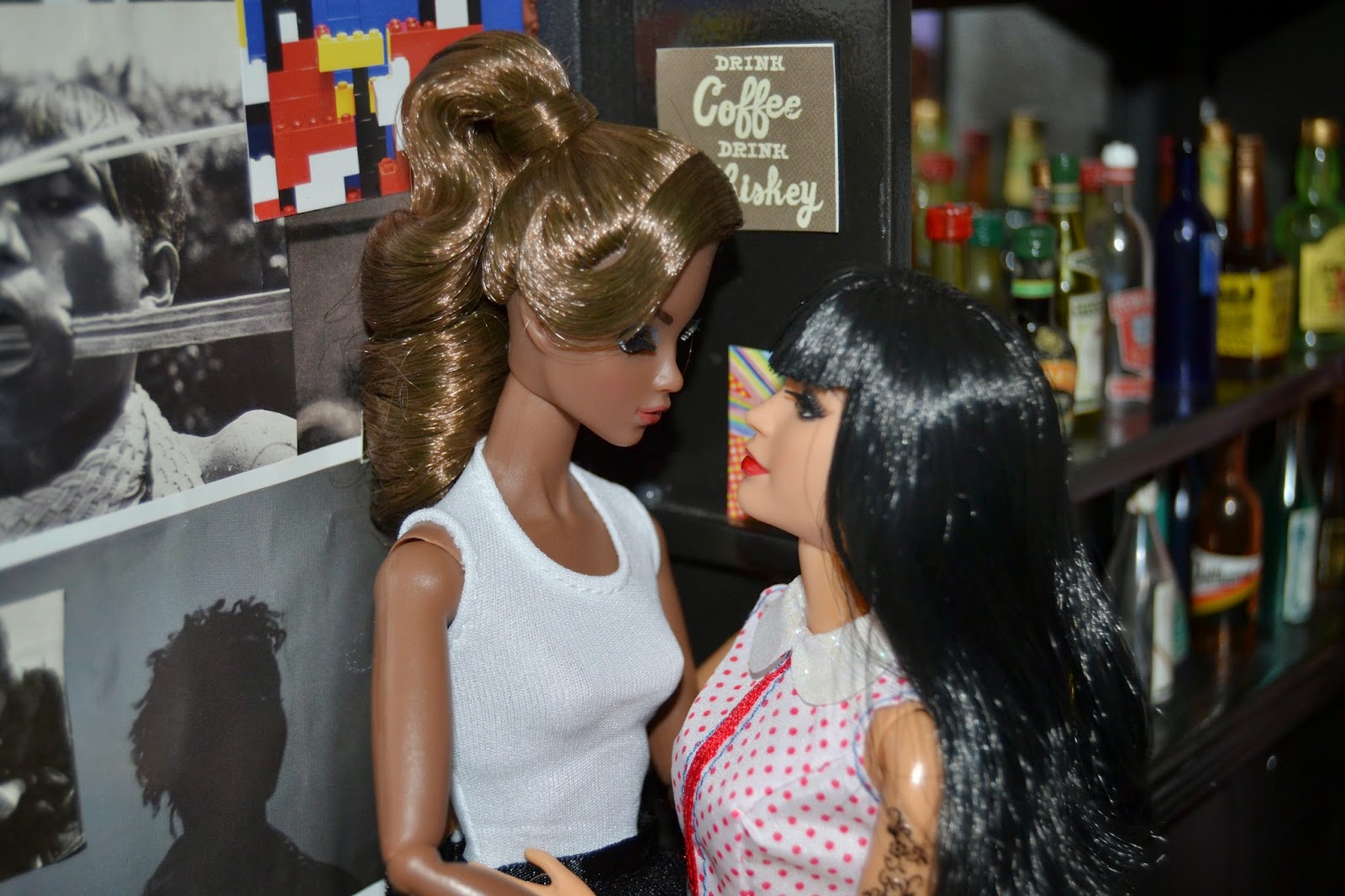 That's all for now folks! Miss you. Bring your asses to Facebook and hang out with some kindred spirits!